Illuminating the crossroads of environment and technology

All it takes is a bite. The nibbles of infected mosquitoes, ticks, flies, and other bugs transmit disease to millions of people each year. And as climate change alters the rhythm and range of environments that allow these species to thrive, it’s also shifting the burden of vector-borne diseases.

Scientists flagged malaria more than two decades ago as an illness likely to be particularly sensitive to changes in Earth’s climate. After all, the malaria-causing Plasmodium parasite in mosquitoes tends to reproduce faster and the mosquito itself tends to take blood more often when the temperature climbs. Just this year ecologists with the University of Michigan were able to document malaria cases expanding to higher altitudes in Ethiopia and Colombia during warmer years, suggesting that similar tropical highland areas in Africa and South America will also see growing numbers of people exposed to malaria risk as temperatures warm.

The World Health Organization estimates that climate change could cause as many as 250,000 deaths per year between 2030 and 2050 due to malnutrition, malaria, diarrhea, and heat stress. Malaria alone is projected to account for 60,000 of these additional deaths. By the 2080s, an estimated 2 billion additional people could be exposed to dengue — the world’s fastest growing vector-borne disease.

These trends are part of why the WHO convened its first global conference on climate change and health this summer, in Geneva, arming participants with information to make the case that climate “is not just about polar bears,” said Perry Sheffield, a pediatrician and lecturer of environmental health sciences on faculty at Columbia University. “It’s about human populations.”

Although leaders in the international public health community have long called for nations to reduce greenhouse gas emissions and promote low-carbon development in the interest of protecting human health, this was a key message, Sheffield said, for health ministers to emphasize to their colleagues a few weeks later at the UN Climate Summit in New York. “I don’t think that conference [in Geneva] was easy to pull off,” Sheffield said. “Climate change is a stumper for a lot of people. It’s big and trans-boundary and long-term in nature. The things we tend to focus on are closer to home and more real-time.”

There is more to the nexus of climate and health than the direct effects of extreme storms, heat waves, and drought. As Flavia Bustreo, assistant director-general for the WHO’s Family, Women and Children’s Health program, explained in a statement this summer, “the most significant impacts [of climate change] often occur indirectly and more slowly, such as under-nutrition resulting from crop failure, respiratory diseases from poor air quality, and water-borne and vector-borne diseases.”

Severe storms and flooding can create breeding grounds for microorganisms and disease-carrying insects. At the other extreme, drought can allow pathogens to become concentrated in wastewater, which may then overwhelm older treatment plants or contaminate surface water. Less directly, food contamination by bacteria like E. coli and Salmonella can become a bigger problem when rainfall is scarce if farmers use improperly treated water to irrigate crops.

According to Fiona Godlee, editor in chief of the medical journal BMJ, the potential health impacts of climate change are so serious that the WHO ought to declare it a global public health emergency. The Ebola outbreak in west Africa —the worst the world has seen since discovery of the virus in 1976 — received that designation this summer after killing nearly 1,000 people. The toll is now close to 4,000. Runaway climate change could be far worse, Godlee warned last week in an editorial: “Deaths from Ebola infection, tragic and frightening though they are, will pale into insignificance when compared with the mayhem we can expect for our children and grandchildren if the world does nothing to check its carbon emissions.”

Simply put, our ability to avoid sickness-spreading bugs, breathe clean air, and enjoy our daily bread are on the line in both local and international responses to climate change. Fortunately, “climate-informed preparedness and prevention can greatly reduce these health risks,” Bustreo said. Public health systems must now develop a disease-prevention and tracking strategy for a warming world.

Such a strategy can entail using weather information, seasonal forecasts, and monitoring of climate conditions, vegetation, and water bodies to plan vaccination drives, target distribution of insecticides and medicine, andanticipate hot spots or outbreaks. Observations of rainfall at the local level can help to flag elevated risks for cholera or malaria. Temperature and humidity data collected over time can be combined with geographic and population data to highlight communities vulnerable to meningitis or malaria transmission and to focus disease surveillance efforts. In one of the latest efforts to get out ahead of these problems, WHO and the World Meteorological Organization have launcheda new joint office on climate and health to give public health workers greater access to climate information and predictions.

“Climate change, by and large, will make existing problems worse,” said Sheffield. “Where there is not health infrastructure, it becomes very difficult to tackle a health problem.” This vulnerability is well illustrated by the current Ebola outbreak, she said. “Ebola is not a climate change event, but it’s an example right now of when things are already not great, and then you add insult, things get a lot worse.”

Precisely how climate contributes to the emergence, re-emergence, and spread of infectious disease remains a vitally important question for researchers. At this point, advances in technology and growing collaboration across disciplines are beginning to provide new insights on cause and effect. For example, in South Sudan, scientists with Columbia University’s International Research Institute for Climate and Society have analyzed data from NASA satellites and sensors andfound that heavy spring flooding may lead to reduced sandfly populations — and thus less biting and transmission of deadly Leishmania parasites in the fall compared to drier years.

Closer to home, research suggests that West Nile virus, transmitted by mosquitoes, could spread north to previously unaffected areas of North America as a result of the climate conditions anticipated by 2050. That risk assessment,published this year by researchers with the Center for Tropical Research at the University of California, Los Angeles, indicates that higher temperatures and lower precipitation are linked to higher probability of West Nile virus cases in people, birds, and mosquitoes.

Already, California is experiencing intense West Nile virus activity amid its crippling drought. “The proportion of mosquitoes infected with West Nile virus is at the highest level ever detected in California,” the state’s public health department reported in September. And the drought might have something to do with it, due to birds coming into more contact with infected mosquitoes around increasingly scarce water supplies.

Deer ticks, the most common vector for Lyme disease, tend to thrive when temperatures are above 45 degrees Fahrenheit and where humidity hits at least 85 percent. They have expanded northward to places where they previously were unable to survive, and the U.S. EPA said, “warming temperatures associated with climate change could increase the range of suitable tick habitat.” (Image credit: CDC.)

As many as 428 human cases of West Nile virus were reported in California this year as of October 3 — more than triple the average for cases reported at this time over the past five years. (Image credit: California West Nile Virus.) 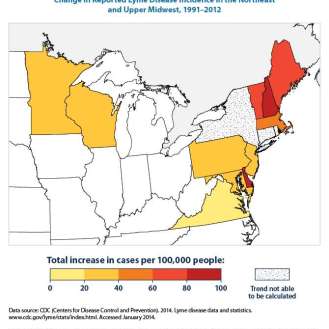 The relationships between climate change and vector-borne diseases are complex, and researchers have yet to fully decipher the interplay of factors involved in the spread of infectious diseases transmitted by insects and aquatic organisms. “Climate is part of this,” said Mary Hayden, a medical anthropologist with the National Center for Atmospheric Research “but it’s not the entire gamut.” Demographic changes, trade patterns, development, deforestation, disruption of predator-prey and host-parasite relationships, and movement of people and animals can all influence exposure and infection too.

“We know the climate is changing,” said Hayden, who studies dengue fever and the role of environmental factors on the spread of disease. “We just don’t know what’s going to be thrown at us as a result of that changing climate.”

For example, experts say long-term climate changes are contributing to the increasing the number of cases of Lyme disease reported across a widening swath of the United States. But the number of reported cases is also influenced by awareness of the disease and time spent outdoors. Other factors feeding the trend include a boom in populations of deer, which host infected ticks; the infection rates in white-footed mice and other animals; and development patterns that put people in closer proximity to disease hosts.

Not all shifts will be for the worse, however. For example, some vectors for disease require water in their life cycles, and more frequent droughts could decrease the threat of infection. In general, changes in storm patterns, temperature extremes, and rainfall could make regions less hospitable to certain disease-carrying organisms. In parts of southern Europe expected to experience increased droughts as a result of climate change, health and environment officials anticipate Lyme problems will shrink, even as warmer winters allow the disease to move into higher latitudes and altitudes. “It may be that with climate change, we see areas that are currently endemic for infectious disease shift,” said Hayden, the NCAR medical anthropologist. “It could go both ways, if we’re lucky.”